One Ocean Exploration Zone at the Newport Stopover 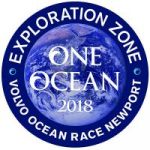 The Volvo Ocean Race Newport Stopover (May 8 – 20) will feature an array of exhibits, interactive displays and games with micro-organisms designed to fascinate school children to grandparents alike. The exhibition inside the Race Village will open on May 12 and continue through May 20.

The One Ocean Exploration Zone is an educational destination offering hands-on opportunities to discover ocean science and the environment. The ocean system connects us all by providing multiple services to our living environment – food, weather patterns, the oxygen we breathe and vast recreational activities.

“The One Ocean Exploration Zone is a multi-stakeholder effort to enhance ocean literacy, broaden awareness of stressors facing the marine environment and educate visitors on conservation and sustainability efforts underway from the local to global scale,” said Martha McConnell, the co-chair of the One Ocean Exploration Zone along with Dave McLaughlin, the executive director of Clean Ocean Access.

The One Ocean Exploration Zone featured prominently during the Volvo Ocean Race Newport stopover in May 2015 when it was named the Exploration Zone. Included among the 131,000 visitors to the stopover were 3,200 school children on field trips from Rhode Island, Southeastern Massachusetts and Eastern Connecticut, all on hand to learn about ocean science. Kim Hapgood, the Program Director at Sail Newport, is expecting upwards of 6,000 school children this year.

Entrance to the One Ocean Exploration Zone and the Volvo Ocean Newport Stopover are free.

“When we first set out to establish the Exploration Zone we wanted to bring together a group of non-profits with like-minded missions to create and highlight educational messages for the public,” said Kelly. “Non-profits collaborating in a non-competitive environment sends a powerful message.”

“The Newport Stopover is the only race village to have an area of this scale specifically highlighting the work of local organizations on improving ocean health,” said Alessandra Ghezzi, Director of Communications for 11 th Hour Racing. “The inclusion of such an extensive and engaging educational space will increase the likelihood that visitors will leave the event with increased understanding of ocean issues and ways to change personal behaviors to leave a positive legacy.”

The theme of “One Ocean” this year aligns closely with the sustainability initiatives that the Volvo Ocean Race is championing at each stopover. The partnership among the organizations participating continues to strengthen. Of the 24 exhibitors signed up 11 are exhibiting for the first time, including the United Nations Environment Program, Mystic Seaport, Save the Bay and the Audubon Society of Rhode Island.

“One of the exciting aspects is the breadth of the organizations that have signed up and the content they’re bringing to the effort,” said McConnell, who recently joined the University of Rhode Island’s Graduate School of Oceanography as a research coordinator.

“This year’s theme of one ocean attempts to illustrate that we’re all connected to the oceans in different ways, so we’ve asked the exhibitors to consider illustrating our influences on the oceans and the oceans’ influence on us. Everyone’s bringing something different to the table,” said McConnell.

The University of Rhode Island will feature prominently with nine planned exhibits. Clean Ocean Access, the Rhode Island Sea Grant, the Rozalia Project and Sailors for the Sea are among the returning exhibitors.

Expected exhibits will feature marine life from microscopic plankton to whales, rovers that can dive to the deepest depths of the oceans and a lifeboat that traveled 800 nautical miles in the Southern Ocean. Other exhibitors are expected to focus on marine stressors, such as plastics and how they circulate around the globe through ocean currents and demonstrate new recycling programs.

Founded in 1973 and now in its 13th edition, the Volvo Ocean Race is the world’s preeminent ocean race for crewed yachts. The Volvo Ocean Race Newport Stopover, scheduled May 8-20, is hosted by Sail Newport, Rhode Island’s Public Sailing Center, the State of Rhode Island, the R.I. Dept. of Environmental Management (RIDEM), Commerce RI and Discover Newport.

The Stopover marks the second time the race calls on the City-by-the-Sea, having previously visited in May 2015 for the 2014-2015 edition of the race. That first-time stopover attracted people far and wide to Newport for 13 glorious spring days of celebration at Fort Adams State Park.

What: The One Ocean Exploration Zone is an educational exhibition offering hands-on opportunities to discover ocean science and the environment.